My Cuban mattress woes are about to become a thing of the past. Now let me get one thing straight from the beginning: I’m no Princess and the Pea. After almost a dozen years of lumpy, hard, and sometimes painful horizontal sleeping experiences in Cuba this (Mac)Queen is about to get spoiled with a super duper deluxe king size memory foam mattress and I am on pins & needles trying to make the day go by faster so I can finally realize this long-time dream of mine.

When I first married my husband he had a double bed and a mattress that looked like it had gone through the war. It was so old that it probably did date back to some war in Cuba’s long struggle for independence. We had to be careful when frolicking on that thing because it had several springs that were sticking way out of place, held back ever so precariously by the fabric alone. I soon convinced him that for our long-term health we had to look for a new mattress. We scoured all the state stores around town with no luck. Finally, desperate for some z’s, outside of the Carlos III shopping mall a guy approached us with a photo album of furniture and claimed he was selling mattresses. Brand new, just like in the stores (that were all sold out), he promised, and at a slightly lower price to boot. We gladly accepted his offer and gave him the address to deliver the mattress. When the delivery car arrived with the spiffy new mattress encased in plastic we were ecstatic and excitedly donated our old mattress to the next door neighbor who was going to have it repaired for his own use. We handed over the cash and never saw the mattress guy again. 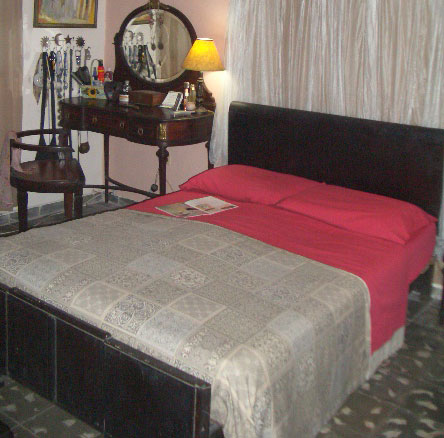 The improvement of having no springs digging into your back and no lumps the size of papayas in the new mattress was immediately noticeable. What we slowly began to wonder about, however, was why we were having trouble walking in the morning. Stiff as boards we were. One day I was at my brother’s place and his mother-in-law was having a couch reupholstered. The lady who was doing the work started telling stories about some of the scams that go on with the mattress resellers. They fill them with leaves, grass, just about anything they can find besides good quality foam or re-used stuffing. “Compro colchones”, the call of the street vendors offering to buy your old mattress, started ringing in my head. I started to suspect we’d been had and that our “new” mattress was a dud. The woman came by our house the following week and with a quick jab of her seamripper, exposed the dirty scam. Flour sacks. That’s what we were sleeping on. When she removed the fabric covering, she counted over 100 sacks. Unbelievable. She restuffed the mattress with “guata” rescued from somebody else’s couch or mattress and it was a considerable improvement, although the wire mesh boxspring substitute on our antique bed left us with a bit of a sag in the middle. So we rigged up some boards underneath which would occasionally slip out of place and jolt us out of bed.

When we moved to our new home, the situation in the Cuban stores had changed and by then Venezuela was sending mattresses to Cuba. We bought an orthopedic (a.k.a. hard) mattress and have been sleeping relatively easy for some years now. But it’s just a double and as much as I love spooning with my husband, sometimes I just want to stretch out and not have to fight him for elbow space. So last March I ordered a king size bed & memory foam mattress by internet and had it shipped to someone I know who was sending a container of goods to Cuba. Today, finally, the last day of August, it’s going to be released from the port. I’m scheming up ways to make sure it gets to my house today because I’m so excited that I don’t think I can’t wait even one more day for it to be set up.

After I sprung for the mattress I read a newspaper article claiming that while the memory foam mattresses are supposed to be terrific for sleeping, sex on them is another story. I warned my husband about this, but told him I didn’t really care about the sex part. What I need is a good night’s sleep. If this new mattress ends up being as tricky as they say and we end up having to do it in the shower, on the floor, in the spare room….I honestly don’t care. After a few unexpected events leading to our cancelled vacation plans this summer, this bed is going to make up for that disappointment. In fact, I may never have to leave home again once I get this bed set up…Stay tuned. If you don’t hear from me again for awhile you can be assured that I’ll have fallen into a blissful much-needed sleep. Princess and the Pea BEGONE! Sleeping Beauty has arrived.