Some people think working as a destination representative for a travel company in Cuba is a dream job. Sometimes it’s great, but mine is a 24/7 job and although I’m very conscientious and extremely detail-oriented, this is Cuba and despite my best efforts, services don’t always go off without a hitch. Alot of our Canadian clients mistakenly assume that Cuba’s tourism industry dies off in the summer when the Canadian geese are happily flying around northern skies. Not so. Cuba has a very large influx of Cuban-American and European visitors in July and August, so much so that the demand for many categories of rental cars is traditionally exceeded by the local supply of vehicles. Man, do we book a lot of car rentals in Cuba for the summer months. Hoping that a rental car of any category will be available last minute during high season in Cuba is a big gamble. A certain 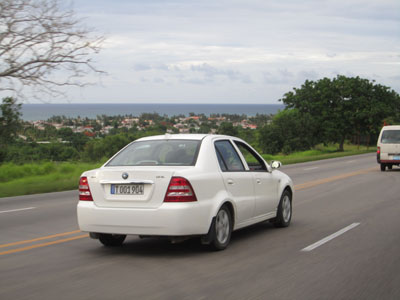 segment of the Cuban-American traveling public is very wary of prepaying services, and we receive numerous messages from them wondering what guarantee they’ll have if they reserve and prepay a car rental only to arrive in Cuba and have the rental company try to pawn off a different category of vehicle or one that’s in rough condition. Some of them even have their local family members act as amateur detectives, calling the rental counters to double-check our work once the service has been confirmed and documents/instructions issued to the client. Unbeknownst to them, this is often a futile attempt to obtain information on their part since bookings and operations are handled through a central reservations office and the actual rental counters don’t usually have information on upcoming rentals until the day prior to the initiation of the service. Funnily (to me anyway), some of them even call us up at the local contact numbers we’ve provided and ask if we’re legitimate. If I were wondering about a company’s credentials and reputation the first person I’d ask probably wouldn’t be the company itself, but maybe they do it just to see if someone actually answers the phone on this end. I’m not really sure. Being one of the few companies that actually publishes unedited and real client feedback (the good, the bad and the ugly), I personally think that’s the best place for any Doubting Tom to begin research on WoWCuba before committing to services. Not only does it give a potential client an idea of what to expect from us as a company, but more importantly to compare experiences of past clients of ours with the various service providers with whom we contract services.

On Sunday morning I was contacted by some clients from New Zealand who’d reserved a 5-passenger vehicle for 4 days to drive from Havana to Santiago de Cuba. The car was reserved for 9 a.m. but still had not appeared at the rental counter by mid-morning. Unbeknownst to the rental counter functionary, the clients found a telephone and contacted me for advice. They were worried that the rental company wasn’t going to deliver the model they’d confirmed since the clients who were ahead of them in the rental contract lineup were upset with the rental counter for delivering a model that wasn’t what they’d reserved. I informed them that this is high season and that from mid-July on some of the rental companies (and particularly the one they selected for their rental) occasionally experience deficits in their rental fleet. It can be due to breakdown, problems with replacement parts supply (which aren’t always sourced in the country), and sometimes is simply the fault of clients who elect to return their rental vehicle after the agreed-upon date and pay a penalty to do so. I advised that if this were the case, then the rental company’s contractual obligation is to replace the vehicle they’d reserved with another of the same category or provide an upgrade. I next contacted the rental company who first indicated the vehicle they reserved was on its way, but immediately thereafter they leaked the bad news that the 5-passenger vehicle was broken and they were offering a smaller economy vehicle as a substitute. It took me just under 3.5 hours of calls back and forth between the rental counter, the rental company’s operations office, their head office, and that of our ground handler until I finally convinced them that all hell would break loose if they didn’t live up to their end of the bargain and deliver a vehicle of the same or superior category. I begged, I pleaded, I explained, and I even got a little mad with the rental company when they kept trying to force the economy car downgrade on my clients. In addition to my elevated stress levels, I probably spent $30 CUC of my cell phone credit on resolving the issue. Which comes straight out of our profits; noone compensates us for the rental company’s inadequacy or poor planning. In the end they did somehow pull a vehicle out of a hat and delivered a car large enough to get the couple and the wife’s parents plus all their luggage across the country without having to tie someone to the roof. When I was finally able to advise the clients that the larger vehicle was on its way, we also agreed that I would begin a claims process with the rental company asking them to consider refunding one of the rental days in exchange for the significant delay in delivering the vehicle. The clients had prepaid for 4 rental days, but since the 4th day was scheduled for an early return, effectively they only were going to be using the vehicle now only for 5 hours on the last day of the rental. I thought that it was reasonable to expect the rental company to extend that refund considering the circumstances, and indicated that I’d be happy to process the claim with our ground handler and the rental company, who can ultimately take up to a month to get back to us on service claims, but I am nothing if not persistent. Pshew. I thought the saga was over and that I could go on enjoying my “day off”.

Actually, my plans for Sunday morning included meeting a group of U.S. graduate students that I’d organized to visit a local agricultural cooperative. I really wanted to get some pictures of their experience there and also to say hi to their tour organizer who I’d met previously here at a Sustainable Tourism conference. While I did get the visit to the “farm” in, it was much briefer than I’d have liked and I was worried the whole time about trying to offer a viable solution to the New Zealanders transportation problem. When the clients finally were completing the rental contract, they called me back to see if the rental company couldn’t throw in the extra driver fee ($30 CUC each) for 2 additional drivers to compensate for their almost 5-hour delay in delivering the vehicle. While I totally understood that they were hot & bothered by that point, I think they were under the mistaken impression that the rental car company and myself actually have the authority to make that kind of decision, which absolutely isn’t the case. There are so many layers of bureaucracy here that sometimes it’s hard to see your way to the end of the tunnel. They called me back while I was just about to have lunch to question the rental company’s local dropoff fees, which are clearly published on our website and coincided 100% with what the rental car functionary was charging on their contract. But apparently they had misunderstood the calculation and wanted us to pay for almost half of the local fee, which definitely wasn’t part of our deal. At that point they were implying that OUR customer service was deficient and that they were going to make it known on Trip Advisor upon completion of their holiday. Sheesh. I was thinking to myself at that point that I should have just told them to accept the smaller vehicle from the get-go, that it was out of my hands, and gone on my merry way. I was speechless when I got off the phone and when I finally tried to tell my husband that they implied I’d been less than professional when I’d just dedicated half of the day to going to bat for them, I simply broke down in tears and told him that some days this job is a thankless one.

But then the very next day I received a call from a repeat Spanish gentleman who comes here year after year and stays for an extended period each time and always reserves his car rental with my husband. After a month in Cuba, he was scheduled to leave the country that night. But before he flew out he wanted to meet with Abel. When he stopped by in the afternoon he mentioned his vehicle had been vandalized while parked overnight at the private house where he was staying and that Abel had intervened on his behalf to have it replaced with a different model. After he completed the police report, the insurance covered all the damages sustained to the vehicle. He was totally thoughtful and brought a bottle of rum as a gift and (more importantly) expressed his thanks for our work on his behalf. I almost started crying again because not many people realize how many hoops we actually have to jump through to make things happen on this end. I think that the very fact that he’s visited here as often as he has in the past has made him more appreciative of the small things. And knowing that he has someone here that is looking out for his best interests is also very comforting. For me, having someone actually express that to us and take the time to personally do so meant more than he probably knows. 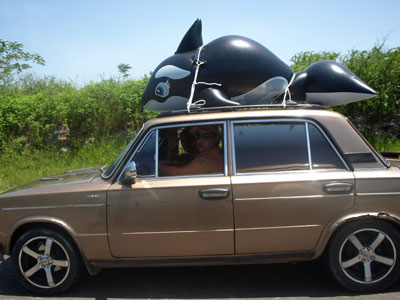 If anyone tries to tell you that everything always goes smoothly in Cuba, they’re either lying or very naive. But having experienced and honest intermediaries on your side to defend your interests when you most need them is a good thing. It could mean the difference between driving across Cuba in air-conditioned style or improvising in one of those Chevy Chase-style family vacations with everything but the kitchen sink tied to the roof of your rattle-trap rental car.

Antiquing in Havana can be fun and revealing. From today's adventures on Santa Catalina:
Santa María del Rosario's a secret gem of a small town in the southern Havana suburb of Cotorro. Its classic baroque colonial church was twice declared a National Monument, with a gilded altar second only to that of Remedios. Besides that, they've been renovating the historical mineral water facilites. We hadn't been through the town in probably more than a decade, but slipped by last night as the sun was setting.
Scenes from Matanzas province yesterday.
On a mission with a friend today in Matanzas, and look at what was hiding behind the door when we got to our destination! Second classic bicycle I've run into in that province in recent months. It has a siren and everything. Gem!!!
Random scenes from today that brought a smile to my face:
A productive and pleasant Friday today. Some of the highlights: 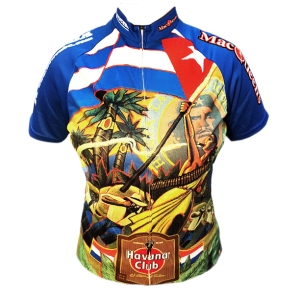